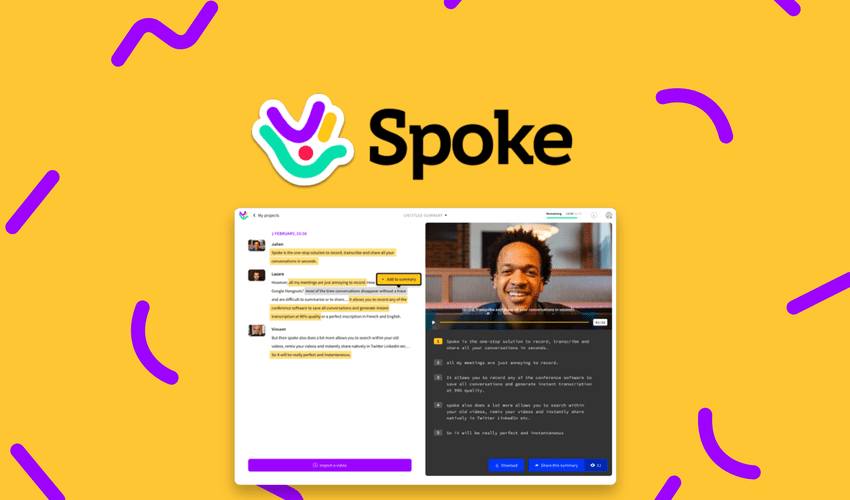 These tools are the kind of software you didn’t think you’d need, but when the moment comes, you’d wish you had it lying around. If you do regular live calls though, it’s probably a no-brainer.

Perfect Recall allows you to record, transcribe and share highlights of your Zoom calls with your team members/clients without needing you to be in the call. Right now it’s strictly limited to Zoom (I’ll go into that later).

Spoke, while requires that you either be present in the call or upload a recording in order to edit, work on any kind of calls. Think Loom/Berrycast + Otter/Happyscribe + video editing & sharing all in one.

Link to Perfect Recall on Appsumo

Link to Spoke on Appsumo

Let’s dive into the good stuffs

When I pasted the Zoom link to Perfect Recall, it prompted the bot to join the call. By default, the name is [First name]’s notetaker. Their recent updates now allow us to change the bot name so you can change it to something like Duy (2nd desktop).

A few things to note:

Editing videos with Perfect Recall is pretty intuitive as I expected.

One thing I also like is that you can add notes to each highlight. It will show up like this 👇

When you share the individual clips, this is what people will see

When you share the entire video with highlights, it looks similar to the editing screen though. One thing I don’t like about this is that there’re too much branding on the public link. Not great when you’re sharing with a client (personally I don’t like it, period).

The last point was the biggest disappointments for me, as I thought I could now sign up to all the webinars and just come back once they’re done, skip all the hellos, “just type in the comment section and let me know where yall from”…and just go straight to the good parts”. Apparently, that was not the case.

Below are the replies from the founder when I asked her about joining webinars and integrations with other tools.

Yes, Perfect Recall can automatically join Zoom calls on your schedule without you being in the meeting. However, we cannot control other people in the call kicking the bot out or the host not letting the bot into the meeting. Additionally, we don’t support webinars yet.

You can paste a Zoom link in a place in the app to manually start the bot as well.

We have plans to integrate with Google Meet, then MS Teams. Other integrations will be based on popular vote!

Yes, the bot would show up in the Zoom call, basically like another participant.

In the meantime, we also have an upload option, so if you record your webinars a different way, you can upload them to get them transcribed.

The reason the bot recording doesn’t support webinars yet is because webinars are structured very differently from normal calls. Most of the time, they require guests to authenticate, and the bot does not have a Zoom account, so it’s an unauthenticated user.
So sometimes, the bot is unable to join at all. Not a great experience for the end user. 🙁

Spoke initially got a lot of backlash, mainly because 1. They launched right after Perfect Recall ended and 2. The limit was noticeably lower than PR. Nevertheless I was intrigued by the idea of recording from other platforms that’s not Zoom, so I signed up for a trial.

In short: I loved it.

Re: Searchable texts: Perfect Recall also claims to have this feature but the only way I found to do this is to actually go into a specific clip -> Cmd+F to search. Unless I missed something, this is not really a “feature”.

With Spoke, there literally is a search bar on the home screen so you can search across your entire library.

This is the part where I think Spoke is better

There are a number of reasons why I prefer Spoke’s interface over Perfect Recall:

Another feature I like about this photo editing process is that you can rearrange the highlights blocks by clicking on the block number and dragging them up or down. This is particularly useful when the video is long and there may be things that you might have forgotten to say at the beginning and added towards the end.

One thing I noticed though is that in Perfect Recall when I clicked on a text, the video will jump automatically to that section. This is very convenient as you can listen to the audio and confirm that the transcription is correct on the fly without having to move around too much.

I didn’t see this in Spoke, so I reached out to the founder and asked and he said they actually took it away recently but will be bringing it back within the next week so that’s great.

When sharing the video from Spoke, this is what people will see

I like it a lot more than Perfect Recall on this, even with the logo showing up here because it’s more subtle and doesn’t try to draw the viewer’s attention away from the content.

Yes the chat bubble is there, and once they click on it, they can see that’s it’s Spoke, but the wording is about trying to help if they have a question, not the CTA “Get Perfect Recall for free” and “Record, transcribe and share video clips from your Zoom calls”.

Other important features – Head to head

This is particularly interesting and I have to say I have not thought of that before coming across this feature. You can go to Summaries -> Create a new summary -> Choose the assets you want to include and edit them into one clip to share.

Perfect Recall also confirmed in their latest newsletter that this is something that would be released soon as well, so everyone who’s using PR right now can rest assured.

Perfect Recall’s resolution is 855×500 while Spoke is up to 4K, depending on your computer’s resolution and internet.

Upcoming features that are in progress

After trying out both tools, I’m leaning towards Spoke more because of 2 reasons:

Is that the same as me saying if you have Perfect Recall, you should switch to Spoke? No, not really.

If one or more of the following apply to you:

… then I think you should definitely get/keep Perfect Recall.

Then Spoke is your kinda tool.

Both of them offer a free plan to set up and try, and I highly, highly recommend you test them out before committing. They have a lot of things that overlap and in the end, it’s really down to your video needs 😁

Link to Perfect Recall on Appsumo

Link to Spoke on Appsumo